I HOW SPENT MY SUMMER VACATION 2015

It doesn't seem like much.  Driving to St. Louis from NW suburban Chicago sounds like a fairly mundane 5 to 6 hour drive down I-55.  Done it before.  This time however, we (Elaine and I) did not take I-55.  We took Old Route 66!  The road is well signed all the way to LA.  We bought a great book that had turn by turn directions and listed interesting things to see, places to stop, etc.  The road had changed over the years so there were different options.  Too many things to mention, so this will be just a sampling.  Pictures below.  We found 66 in Joliet and were immediately greeted by a giant dancing Jake and Elwood Blues on top of an original 66 ice cream stand.  Not far down the road was an old Sinclair service station with a giant Dino the Dinosaur on top (my father owned a Sinclair station back in the '60's and we had blow up dinosaurs all the time so this brought me back).
The guidebook mentioned to watch out for the giants.  There was the Gemini giant spaceman in front of the now closed Launching Pad drive in in Wilmington, Illinois, home of Mobster Tanner Roark.  In Braidwood we stopped for lunch at the Polka-dot drive in which featured a large Elvis statue in front.  Food not any better than a McDonald's but we were there for the history and ambiance.
Further south, in Dwight Illinois we were told to visit a restored service station.  The place was a Texaco that the town lovingly restored to it's 1950's glory.  It featured the last gasoline pumps ever used on the entire length of 66 (price was 49.9 cents a gallon).  There was a restored fire engine from the 1930's and tons of memorabilia.  We came across several restored stations all along the route.
Driving on, we came to some actual brick road for about a mile and a quarter.  Later on, the guidebook said for a slow, bumpy ride to turn left at a particular intersection so of course we did.  This was old,OLD 66 circa 1926 to 1930.  It was barely wider than a sidewalk and had deep cracks and ruts all along but it was absolutely a hoot to drive on.  It went on like this for about 10 miles.  We were told to watch for turkey tracks in the road and we found them!  Darn turkeys crossing the wet road in 1926 and their tracks are preserved.  Missed the dog tracks, though.
The guidebook said to visit the Route 66 Museum in Pontiac Illinois.  You might meet the mayor....AND WE DID! The museum was a great repository of memorabilia.  Did you know that there is a Route 66 Hall of Fame?  Well, there it was at the Pontiac museum honoring places and people who in some way made Route 66 the icon that it is.  There was also a nice park along the Vermillion River in Pontiac to take a nice walk and relax for a bit.  They built what they call swinging bridges across the river that bounced more than swung.
Now it was getting close to dinner time.  The guidebook said to NOT skip Atlanta Illinois.  In Atlanta was the 2nd of the Giants mentioned in the book, a Paul Bunyon type holding a hot dog.  Across the street was the iconic Palm's Grill Cafe which the guide mentioned was worth a stop.  The decor was 50's, the waitress was dressed for the 50's, there was a 50's style rotary phone which was in working order and the only phone they used.  We sat at a long counter.  The blue plate special was meat loaf.  Cripes, it was a time machine.  Food was good, inexpensive (less than 20 bucks for the two of us) and the service friendly.  I won't say the mood was destroyed when they used a square to take my credit card but it did seem out of place there.
Stopped for the night in Lincoln Illinois at a Best Western that featured a giant conastoga wagon with a giant Abe Lincoln sitting on top.  In the Guinness Book as the largest covered wagon in the world.
2nd day we made a stop in Carlinville, where 66 is part of the town square.  There was a restaurant there that up and moved to Litchfield when the route changed and went to Litchfield so we took IL-19 to Litchfield, about 20 miles and had lunch at the Ariston Cafe.  Looked more like your regular sit down restaurant, but the food was super and the prices, again, dirt cheap.  They had a little museum inside the restaurant and there was also a 66 museum in Litchfield that focused more on the history of the town.
Stopped at Funke's Grove to buy some maple sirip (that is how they spelled it) and saw the 3rd of the Giants at an antique mall (along with a giant pink elephant).  Then into St. Louis where we left 66.


In St. Louis we spent the day at the Museum of Transportation.  We're train freaks and this was a great place that also featured old cars.  The only downside was that the museum has no rolling stock.  The train museum by my house has a 7 mile track that has old trains going up and down on, but I digress.  Used the scenic route along the banks of the Mississippi to drive north to Iowa.  Stopped at Eldon to see the American Gothic house, the actual house Grant Wood used for his famous painting.  Stayed for two nights at a great B & B in Muscatine, Iowa (former pearl button capitol of the world) and, of course, Field of Dreams.  Even got to hit a few.  The Steinberg's will come, Ray.  Oh, the Steinberg's will most definitely come.


Then home.  For us, it is not the destination, but the actual journey.


Thanks for reading my short travelog.  Pictures below. 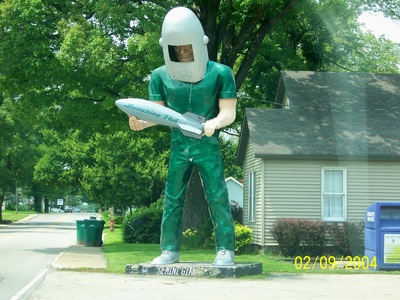 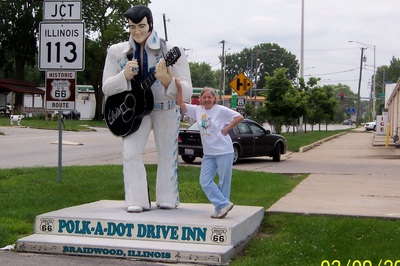 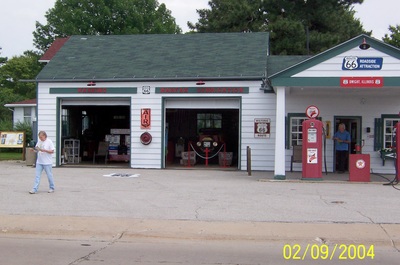 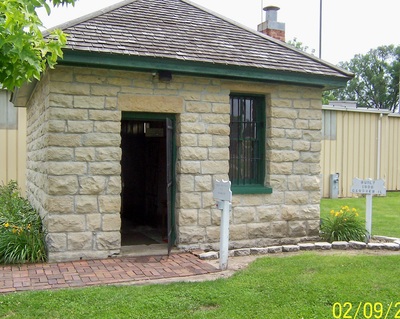 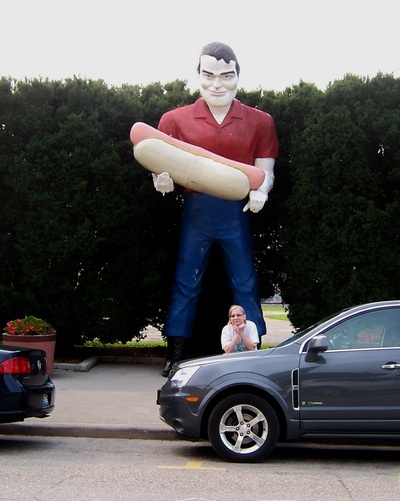 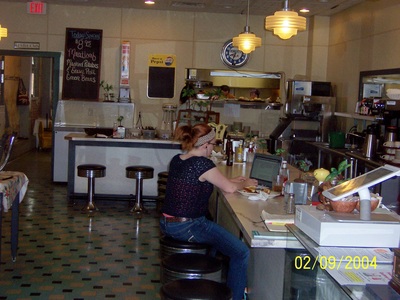 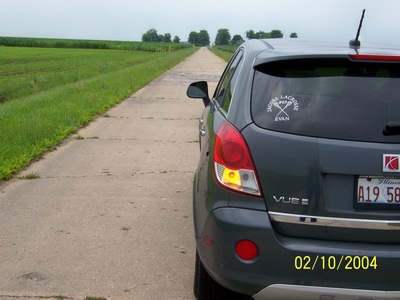 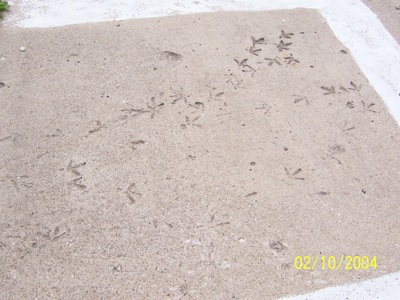 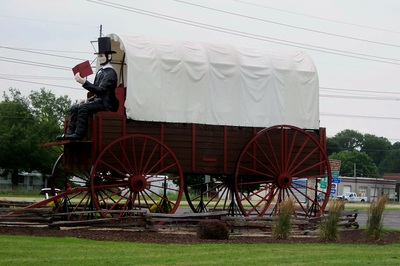 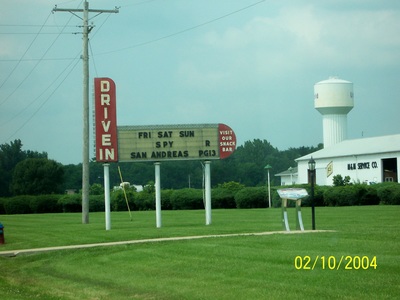 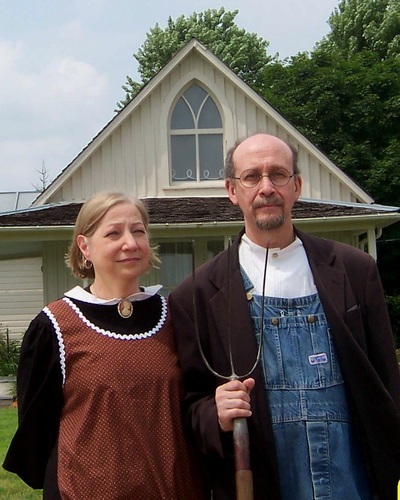 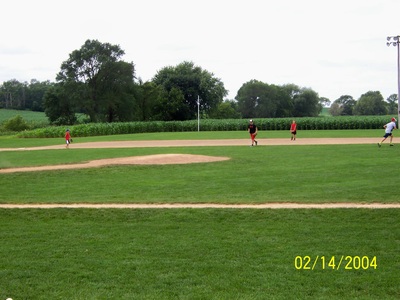 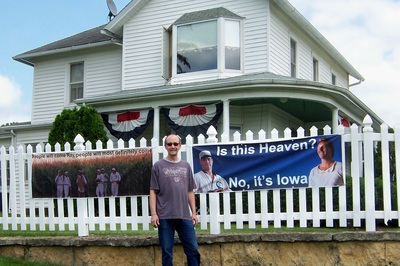